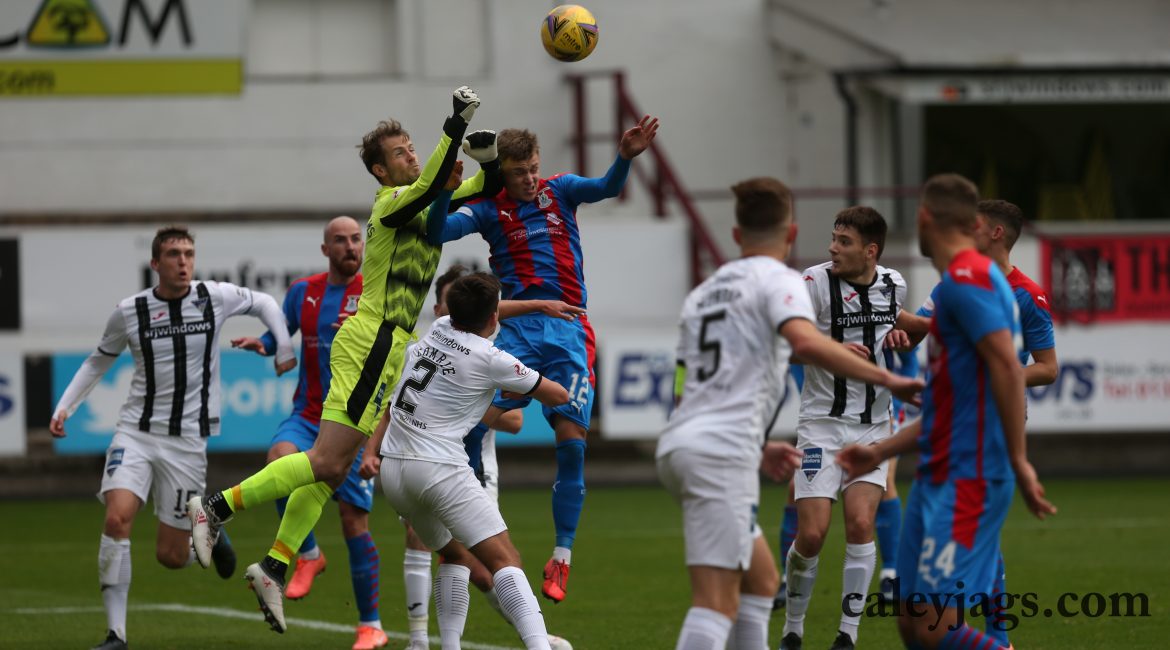 Nikolay Todorov gave Inverness the lead with less than 90 seconds, with a high close range finish into the roof of the net but the Pars equalised after 22 minutes through Ewan Murray. Second-half goals from Ryan Down and Declan McManus secured the win for Dunfermline.

John Robertson made three changes to the side which played Cowdenbeath on Tuesday with Mark Ridgers, Scott Allardice and Nikolay Todorov coming in for Cammy Mackay, James Vincent and Miles Storey.

Caley Thistle named a young bench with several players missing out due to injury.

It was a perfect start for the Caley Jags as they had the lead through Nikolay Todorov. Sean Welsh found Daniel MacKay down the right hand side and delivered a great ball to the back-post which was prodded in by Nikolay Todorov to make it 1-0 to Caley Thistle.

Dunfermline looked to hit back straight away, a corner from the left found McManus in the middle of the box but his header was over the bar.

After being on the end of a strong challenge from Euan Murray, Nikolay Todorov initially needed treatment and after attempting to carry on he needed to be replaced. James Vincent replaced Todorov with James Keatings initially going up front.

Dunfermline did get level after 22 minutes, Dom Thomas’ corner found Euan Murray in the middle of the box and he headed past Mark Ridgers to level the match.

After 29 minutes on the clock, Dunfermline had a chance through Iain Wilson to take the lead. McHattie’s failed clearance had to cleared off the line by Vincent and the rebound fell to Wilson but his effort was over the bar.

After 35 minutes, captain Sean Welsh was close to picking out Keatings in the box but Watson turned it behind for a corner. Keatings took the resulting corner but the home side got it clear.

In the second-half, Brad Mckay did well as Kevin O’Hara raced through on goal but he got back to block it behind for a corner.

After 56 minutes, Ridgers produced a fine save to deny McManus from close range as he met Josh Edwards’ cross in the middle of the box.

Caley Thistle almost had the lead through Daniel MacKay with twenty minutes to go. After being released by Mark Ridgers in his ow half, it was a great run from Roddy MacGregor down the left as he forced a corner kick.

The resulting corner swung in by Scott Allardice wasn’t dealt with by Fon Williams and fell to Daniel MacKay but the Welsh goalkeeper was on hand to save his low effort.

After 79 minutes, the home side had the lead through Ryan Dow. A free-kick was headed across by Watson to McManus and Ridgers pulled off a fantastic save to deny the striker but Ryan Dow was on had to score the rebound.

Caley Thistle looked to hit back straight away after 82 minutes, Keatings was fouled by Edwards and he took but the resulting free-kick which hit the Dunfermline wall.

Dunfermline sealed the win after 85 minutes, a long ball found Declan McManus and he did well to hold off Brad Mckay and unleashed a great effort which flew past Ridgers via a slight deflection off Robbie Deas.