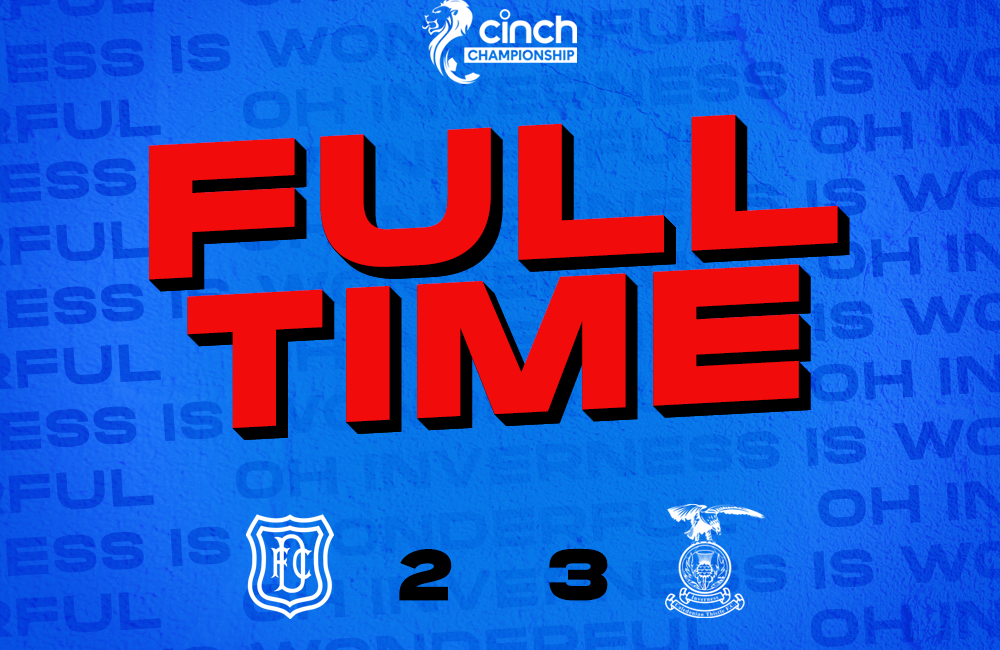 Two stunning strikes from Cameron Harper and a penalty from Billy Mckay gave Caley Thistle all three points in a thrilling 3-2 win against Dundee at Kilmac Stadium.

Head Coach Billy Dodds made two changes to the side which beat Raith Rovers two weeks ago with Austin Samuels and Billy Mckay coming into the side for Wallace Duffy and George Oakley.

The home side started brightly and went close as Billy Mckay was in the right place to clear Zach Robinson’s goal bound effort off the line and behind.

Dundee took the lead after 12 minutes on the clock. A corner was sent in by McMullan and wasn’t dealt with by the Caley Jags as it looks as if Sweeney got the final touch for the hosts.

Caley Thistle responded with a near instant equaliser as the ball broke to Cameron Harper on the edge of the box and bent the ball into the top left corner.

Mark Ridgers had to be alert as he turned Lee Ashcroft’s header over the bar. While with five minutes left of the second-half Austin Samuels was forced off with injury and was replaced by Aaron Doran.

Caley Thistle were awarded a penalty right on half-time as Cameron Harper was fouled by Dundee keeper Harrison Sharpe. Billy Mckay stepped up to take the penalty and his strike went in via the post to give Caley Thistle the lead at the break.

The Caley Jags started the second half well and Steven Boyd’s cross into the box caused a scramble, but Harrison Sharpe was able to gather it.

Daniel MacKay then saw his effort from just outside the box go over the bar after a Caley Thistle counterattack.

Dundee got level just before the hour mark. Paul McMullan blasted a shot goalward and it was turned in by Joe Grayson from close range.

Dundee then began to put the pressure on as Ridgers had to palm clear a McMuallan cross and the rebound fell to Mulligan but Ridgers produced a good save.

The Caley Thistle keeper then did well to get down low to Paul McMullan’s effort.

The winning game came after 83 minutes as Cameron Harper produced a second fine strike of the afternoon. He was given the ball by Daniel MacKay on the edge of the box and he produced a great low strike into the bottom corner past Sharpe.

Late into the game Dundee captain Ryan Sweeney was shown a second yellow card as he took down Zak Delaney as the home side finished the game with ten men.