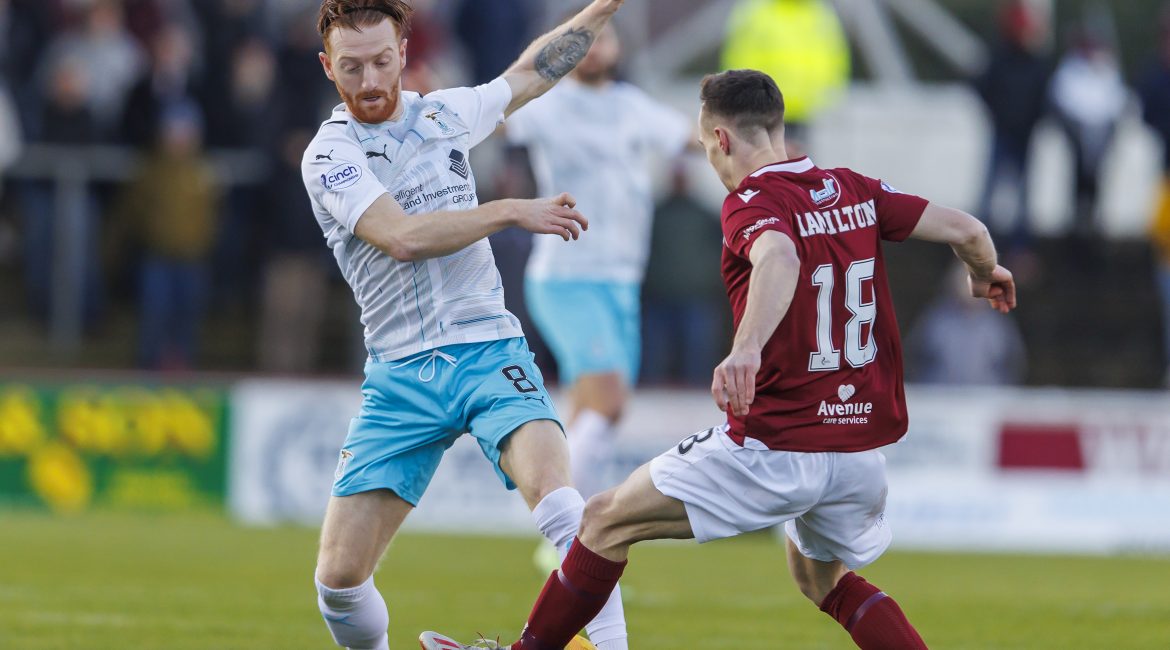 Honours Even as Arbroath and Inverness battled against the elements in a windy day at Gayfield to begin the year with a hard-earned point on the road.

Billy Dodds made one change after the Caley Jags last time out against Hamilton with a few players unavailable for this fixture, which saw Wallace Duffy return to the starting line-up at right back as David Carson moved back into midfield for Reece McAlear.

Dick Campbell made two changes from his sides last game with David Gold and James Craigen coming into the team for Liam Henderson and Scott Stewart.

It was clear from the start that the windy conditions were to play a big part in the game with the ball being held up by the wind from goal kicks and passes going astray.

Early on, some good play between Nouble and Gold on the edge of the area granted them a half chance at goal but the Caley Jags were able to clear and counterattack.

Wallace Duffy picked up the ball and found Walsh on his right towards the corner flag, the winger floated the ball into the danger area, but Gaston was able to palm the cross away to safety.

Moments later, Shane Sutherland did well on the opposite flank as he shoved off his man and whipped one into the Arbroath box but no one was able to capitalise as Arbroath dealt with the cross once again.

17 minutes in, Kirk Broadfoot looked to try his luck from the halfway line in to try and catch out Gaston the windy conditions, but the Arbroath keeper gathered it with relative ease.

In the 21st minute, Anton Dowds fired one towards Mark Ridgers goal, but Danny Devine did well to block the goal-ward effort before Inverness were awarded a free kick on Aaron Doran to stop any further Arbroath attack. Scott Allardice found the ball on the left as Inverness looked to counterattack and the midfielder fired the ball into the six-yard box, his effort was assisted by the wind towards goal which gathered pace making it awkward for Gaston but the keeper was able to tip the ball over the crossbar for a Caley Thistle corner.

A brilliant solo run from Nouble presented him an opportunity to put the home side ahead but Mark Ridgers was able to gather the striker’s effort. Another counterattack from Inverness this time found Aaron Doran who cut inside on his right foot before trying to guide his shot into the top right of Gaston’s goal, but his shot was just inches past the post. Minutes later Doran found himself in almost exactly the same position  but this time the wind guided his shot well over the bar.

Arbroath piled the pressure on the Inverness backline in minute 33 as Dowds fired the ball over the face of Ridgers goal but none of his Arbroath teammates were there to meet the cross. Arbroath were then awarded a free kick in a dangerous position towards the corner flag leading to an opportunity for Ricky Little whose shot was blocked before the ball finally went out for a Caley Thistle goal kick after Colin Hamilton picked up the rebound and fired over the bar.

Nouble was a threat again as he found the ball on the edge of the box and fired another shot at Ridgers who was able to get down to his right to gather to strikers’ effort once again.

Just before the break, Inverness were awarded a corner after Tom Walsh’s cross was deflected by the Arbroath defence. The resulting corner found Scott Allardice on the edge of the box and fired goalward, but his shot was blocked. The ball was then worked towards Carson on the left whose cross was put out for another corner which led to nothing. However, an injured Aaron Doran seen him replaced with Cameron Harper before the break.

Arbroath put the pressure on after the break as Danny Devine was there to put an Arbroath cross out for a corner. The resulting corner found Nouble who tried to control the ball and fire at goal but the striker couldn’t quite get his effort off – leading to a scramble in the box which was cleared as far as O’Brien who fired an effort wide of the mark.

The ball fell nicely to David Carson in the 55th minute as the midfielder tried to test Gaston from range but his effort was blocked again by the Arbroath back line. Arbroath’s quick counterattack looked dangerous before being turned away for a corner which was well held by Mark Ridgers.

67 minutes in, Billy Mckay did well to intercept an Arbroath throw allowing Inverness to counterattack, Mckay picked out a running Cameron Harper on the left who showed great pace down the wing before picking out David Carson on the edge of the box. This time the midfielder’s effort was just inches from breaking the deadlock as his shot clipped the outside of the Arbroath post.

73 minutes in, it looked as if Arbroath had taken the lead when Jamie Craigan’s long range effort found the back of the net after his shot was deflected past Ridgers. But the home sides celebrations were cut short as the linesman deemed the goal offside due to the deflection, keeping the score level going into the final 15 minutes.

With 5 minutes left to play, Ridgers ran from his goal to clear the ball at the corner flag, only to be beaten to the ball by Arbroath substitute Jack Hamilton, who tried to catch out Inverness with an open goal from a tight angle, but the substitutes effort bounced wide of the Inverness goal to keep the score level and share the points at the top of the table.

Next up is Raith Rovers back at the Caledonian Stadium in our next fixture in the cinch Scottish Championship.