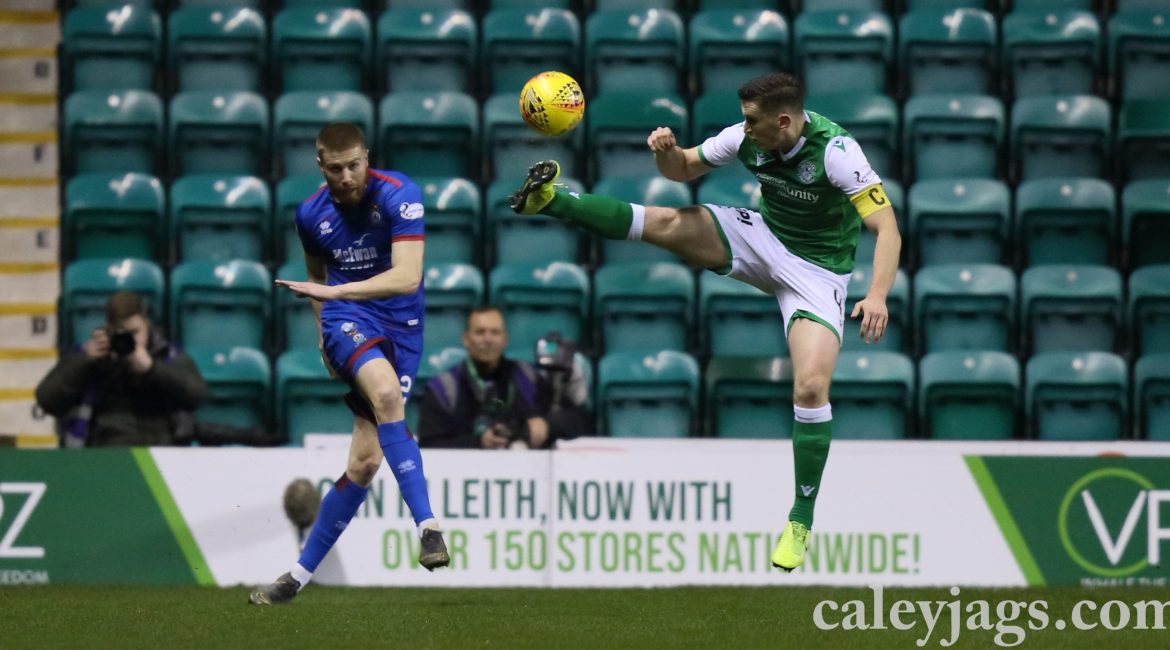 John Robertson made four changes to the side which beat Dunfermline 2-1 at East End Park as James Keatings, Tom Walsh, Kevin McHattie and Charlie Trafford came into the side for Roddy MacGregor, Miles Storey, Lewis Toshney (cup-tied) and James Vincent.

Caley Thistle were looking for their second Premiership scalp after beating Livingston in the Fifth Round and were close to taking the lead in the opening minute as Tom Walsh’s cross found Jordan White in the middle but his header was straight at Hibs keeper Marciano.

After 7 minutes, Martin Boyle was booked for simulation after being played clean through on goal by Scott Allan and the winger went down under the challenge of Mark Ridgers.

Caley Thistle continued to look threatening and Tom Walsh saw his effort go across the box after a good move from Caley Thistle involving the winger, White and Keatings after 17 minutes.

Just before the half-hour mark, Hibs were awarded a penalty kick. Kevin McHattie was judged to have pulled McNulty down in the box and Nick Walsh pointed to the spot.

Hibs captain Paul Hanlon stepped up to take the penalty but he was denied by a superb save from Mark Ridgers and the rebound came back to Hanlon and Ridgers again tipped it over.

Tom Walsh was then inches away from opening the scoring for Caley Thistle as he raced clear and go a shot away from just inside the box but saw his effort hit the inside of the post.

Hibs did have the lead after 38 minutes, Stevenson’s deep free-kick was flicked on by Doidge into the path of Adam Jackson in the box and the Hibs defender turned it in from close range to opening the scoring.

In the second-half, Inverness started brightly again as Walsh forced a save from Marciano after 49 minutes.

Scott Allan was found on the edge of the box by Martin Boyle but his shot was wide of the mark.

After 57 minutes, Allan did have his goal after he finished a quick counter attack from the home side. Hibs broke through Martn Boyle as he slipped the pass to Mark McNulty and he found Allan in the box to finish for 2-0 to the home side.

After 71 minutes it as 3-0 to Hibs, Paul McGinn found Rangers loanee Greg Docherty in the box and his shot was low and past Ridgers.

Inverness grabbed one back just a minute later, straight from the re-start Inverness work the ball well and it resulted in Charlie Trafford finding Carl Tremarco in the box and his shot deflected past Marciano to make it 3-1.

This proved to be an action packed period of the match and after 74 minutes, Brad Mckay was shown a straight red card by Nick Walsh after a late challenge on Christian Doidge. The resulting free-kick made its way to McNulty in the box but he was denied by a fine save from Mark Ridgers.

With just under ten minutes remaining, substitute Stephane Omeonga made it 4-1 to Hibs with the pick of the goals as he found the top corner as he unleashed a strike from around 25 yards.

Another substitute got in on the scoring for Hibs as Jamie Gullan drilled low past Ridgers from about 8 yards after 84 minutes.

Caley Thistle would be last on the scoresheet, after 88 minutes Tom Walsh saw his corner cushioned down by Shaun Rooney and Nikolay Todorov then finished the ball from close range for his 6th of the season.