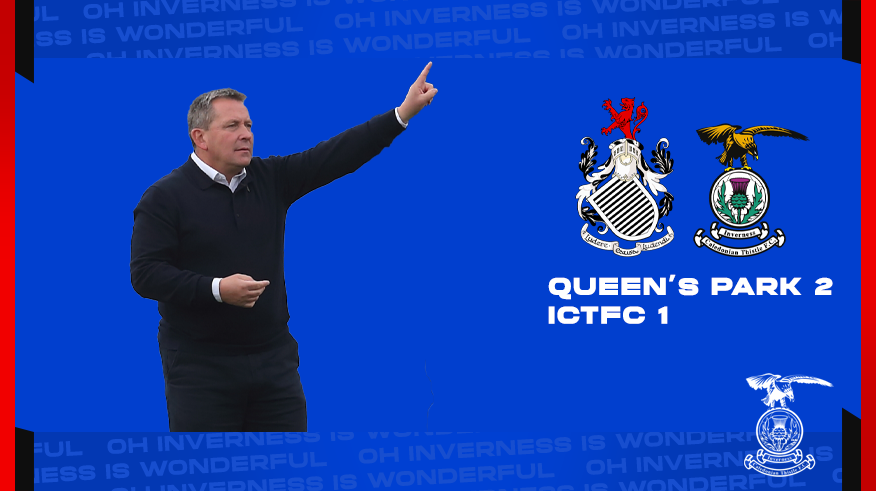 Q: What was your take on this evening’s game?

BD: “I think we have to realise that Queen’s Park were good tonight but we gave them a helping hand with the goals. I thought the game was a right good tempo but everything we did in the first half we stopped doing in the second-half. Their extra man in the middle of the park gave us a problem, so they had the better of the second-half.”

“They had a couple of chances, we ride that out and they get their goal and then we matched them up. I thought that helped us, I thought we got two or three chances after that but then when they score it’s an uphill task after that. We kept going, we have one really good chance where Billy is inches away from getting an equaliser but Queen’s Park were right at it. We just fell short tonight, we fell short in terms of our squad personnel again, it’s not an excuse it’s factual. We’re putting a young boy on again, and Aaron Nicolson did brilliantly, but we’re trying our best.“

“We’re competitive, we’re there but we’re just missing that edge. That’s where I feel we are at right now. I think when we get the full quota back, hopefully we’ll get a few back soon, even if we get three quarters of the quota back then I think we’ll be a team to be reckoned with but right now we’re just missing that. Against Arbroath and tonight we take the lead but we’re missing that edge if it is subs or the experience just to see the game out but fair credit to Queen’s Park, I thought they were good tonight and they played with a real tempo and energy. I thought my team matched them, especially in the first half, I just thought we fell short in the second-half.”

Q: Ayr Utd in Inverness next week will be another big game, won’t it?

BD: “It’ll be tough, but we’ve got to be competitive again. We’re a team that when we play and do the right things that we’ll create chances and score goals. Even with a team that is way short of our best squad. We have to realise that anyone missing what we’re missing it would effect them and that’s where we are. We still keep going, we still be competitive, we’re still matching teams, there’s not many teams giving us a doing I know we took a 4-0 against Morton but we’re losing slack goals just now because we’re fragile. It’s where we are, there’s a reason for it and I think most people realise that.“

“We’ll take the game to Ayr there’s no doubt. I watched their game against Hamilton on Friday, they weren’t at their best but they’ve got momentum just now and got the three points. We’re really down in numbers but we’re still scoring and looking dangerous. We’re just not holding firm just now but I’ve already given you the reason for that, we’ve not got that nous, that experience to see us through. When I come to the bench, they’re a good group of lads, but it is not easy right now and it is just where we are. When I get my full team back, or most of my team back, I think we’ll be a force to be reckoned with.”