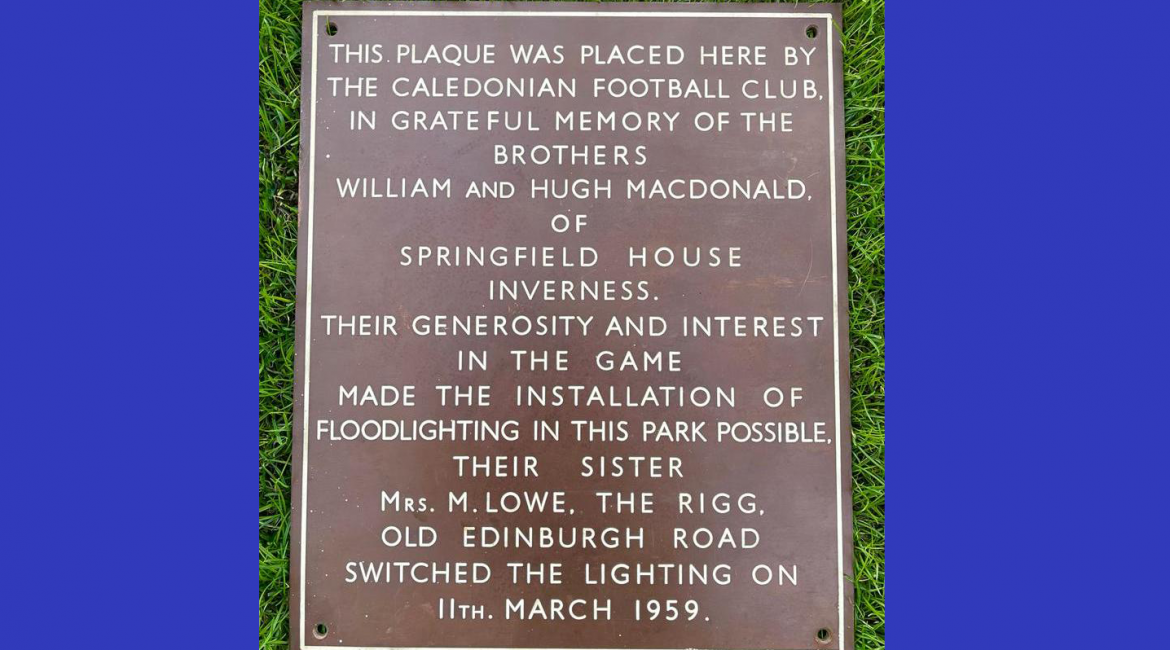 Research to capture memories of football in Inverness and the Highlands down the years has shone a light on what is believed to be the first floodlight system to be installed in Scotland, and reveals how the experiment was extinguished by the first major search for the Loch Ness Monster.

After only a couple of games at Telford Street, Inverness – home of Caledonian – in 1933, the lights were dismantled and relocated to the shores of Loch Ness where a huge reward was being offered for the capture of Nessie.

It was not until 1959 that a major floodlighting system was installed at Telford Street when Rangers and Celtic players playing in an Old Firm select side took the field against Caledonian.

Jamie said that the first game in Scotland under what we would consider modern floodlights (high-powered bulbs mounted on tall pylons) took place at Telford Street Park, Inverness on the evening of Wednesday 22 March 1933 when Caledonian beat Clachnacuddin 2-1 in a benefit match to mark the long service of Caley players Andrew Mitchell and K.J. Whitton. The crowd was 2,500.

Three lamps, each of 1,000 candle power, were erected on poles along the two sides of the park and according to reports at the time “play was never difficult to follow”, although poles at either goal might have prevented a slight shadow in the centre of the field.

A white ball was used, and it was renewed periodically as it became greyish, the match report added.

A second game was played under the lights a few weeks later when Caledonian defeated Aberdeen University 4-3.

The verdict of the North of Scotland Football Association was that floodlight football had a promising future in the north.

Despite the experiment being deemed a great success, it wasn’t repeated due to a chain of events over the following months.

Jamie recalled: “A few weeks after the floodlit game had been played, the upgrading of the A 82 Inverness-Fort William Road was completed, and it was a huge improvement which brought many more visitors to the area.

In July 1933, one of those visitors was George Spicer, who while travelling a few miles south-west of Inverness with his wife, spotted a “most extraordinary form of animal” crossing the road in front of their car.

“Their sighting was published in the Inverness Courier, whose editor used the word “monster” to describe the creature.  And the media phenomenon of the Loch Ness Monster was born.

“Now, what has this got to do with Caley’s floodlights, you might ask?  By October 1933, London newspapers were sending correspondents north to cover the story and a reward of £20,000 was offered for the monster’s capture. This is the equivalent of £1.4 million in today’s money!

“People camped out along the shores of the loch, trying to spot the beast and in order to assist with the search, Caley’s pioneering floodlights were dismantled and taken a few miles down the road to Loch Ness to set up to assist the search for Nessie.”

There had been a number of attempts at floodlighting involving Morton and Third Lanark but the first recorded Scottish League game under floodlights in Scotland appears to be Stenhousemuir against Hibernian on 7 November 1951.

It was not until 1959 that Caledonian installed a floodlighting system at Telford Street and to mark the occasion on 11 March, they pulled off a major coup by attracting an Old Firm Select side north. Scot Symon of Rangers was the manager of the Select who played in Rangers away strip.

Caley put up a sterling performance but lost 4-2 to their Glasgow rivals in front of a bumper crowd of an estimated 6,000 fans.  Sammy Baird (3) and Jim Conway scored for the Old Firm Select while Rodwill Clyne and Jimmy Ingram replied for Caley. The club recently discovered the impressive plaque which was unveiled to commemorate the new light system. It was dedicated to William and Hugh Macdonald, the brothers who made generous donations to the new floodlight fund. Interestingly, they lived in Springfield House, now the site of the 5 star Ness Walk Hotel in the City.

Gordon Fyfe, Joint Chair of ICT Community Trust, who are promoting the project in partnership with High Life Highland, said: “The Nessie floodlight story is just one of the fascinating memories that our project is unearthing. Inverness has such a rich football history, and it is fun researching the stories that made the headlines down the years and recording the stories of players, officials and supporters who helped make them. It has been fantastic to see the story picked up by the national press and the BBC. It is such an unusual and imaginative and quirky tale.”

“Inverness Football Memories is a project that builds on the success of our monthly football memories meetings, which aim to revive memories from the past in a friendly social setting.”

“There are excellent sources of information in existence through the books written to record the histories of the various clubs. We aim to bring all the information together and provide a well-researched history of the game in the city in an entertaining way”

“The first phase of the project is the launch of Inverness Football Memories on the Am Baile web site as we continue to populate the site with more stories, photos and film. Then we will roll out other elements of the project as and when funds become available. Our ultimate aim is to mount a display of memorabilia in a permanent or mobile exhibition.”

The ICT Community Trust is keen to mount a permanent Inverness Football Memories display in the city and welcomes any donations or the loan of memorabilia that will enhance the project.

Am Baile is hosting the Inverness Football Memories Project, which features more than 200 photographs as well as memorabilia and the football memories of more than 40 players and supporters from ICT, Inverness Thistle, Caledonian and Clachnacuddin.  It can be found at www.ambaile.org.uk/inverness-football-memories/